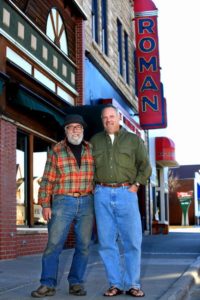 The historic Roman Theater first opened and began showing movies in 1917. It has operated continuously as a first run movie theater ever since. The building was purchased by Jeff Anderson and Betsy Scanlin in 2012 and upgraded to a state of the art Christie digital projection and dolby sound system in 2014. The theater is leased and managed by Beartooth Business Consulting. It remains primarily a movie theater but also hosts a number of music events and fundraisers.